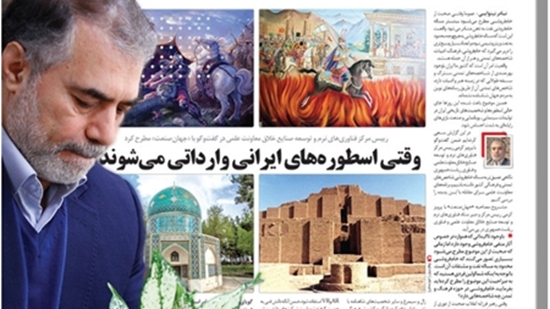 This issue has caused the empty space of Iranian myths and historical figures in the cinema productions, animation and computer games industry to be strongly felt these days.

In this report, we have tried to have a deeper look at the issue of raw sale of the country's civilizational and cultural indicators and the programs of the Vice Presidency of Science and Technology while talking with Parviz Karami, the head of the center and the secretary of the soft technologies and development of creative industries headquarters in the Vice Presidency of Science and Technology. To deal with this phenomenon, let's examine it.

Following is the detailed interview of Jahan-e- San'at newspaper with Parviz Karami.

*Despite the emphasis that is always there regarding the negative effects of selling crude oil, but when it comes to this issue, many think that selling crude oil is limited to the issue of oil and its derivatives. Considering that you are the first person who has openly raised this issue; Tell me, what are the characteristics of selling raw materials in the field of culture and civilization?

When the wise leader of the revolution, talks about staying away from selling raw materials, there should not be a perception in the society that selling raw materials is only limited to oil and petrochemicals, mining and other such things. Everything that is outside of the promotion and enhancement processes and the exploitation and use of knowledge and technical knowledge is included in the definition of raw sale.

Particularly, the issue of raw sales is seen and discussed more in the field of literature, humanities, culture and art. Especially in the field of culture, art and ancient literature, as our country is a country with a great and rich history and civilization, we must avoid the raw sale of our cultural and artistic works and services.

Iran has a very rich and ancient literature, and in this literature characters, symbols, myths and personalities can be used to create literary, cultural and artistic works in different types and genres and in creative and cultural industries. Note that many films and series produced by neighboring countries are adapted, marketed and produced using Iranian myths, characters and stories and literary, cultural and civilizational themes. These neighboring countries created characters by using the texts, stories and characters found in Iran's writings, and in fact, by simply changing the names of Iranian characters, they used them in their serials and movie productions and processed their productions into other countries including our country.

As an example, one of the neighboring countries in the production of a series has used Iranian legendary and mythological characters such as Rakhsh, Rostam, Esfandiar, Zal and Simorgh and other Shahnameh characters with a name change to say that their country had a deep-rooted culture.

* In your opinion, what does raw selling in the field of tourism and cultural heritage include?

Raw selling is evident in this area as well. The lack of penetration of innovation and the use of up-to-date and new technologies in the matter of introducing tangible and intangible heritage makes this position understandable. Examples can be mentioned in the field of tourism and cultural heritage.

For example, if you have visited the tomb of Bu Ali Sina and the tomb of Atar Nishaburi, Cheghazanbil, or Persepolis, you will see that in the best case, a tourist guide is present there and provides general explanations about that place or the customs and civilization there. Naturally, if different people enter the place at different times, they will not receive the same explanations, because the tourist guide is also human and gets tired, and over time, the topic becomes repetitive and boring for him, and he may explain things too little or too much.

If films, animations, games, and AR and VR technologies are used to introduce and explain cultural heritage, sites, and historical figures, while technical knowledge is employed, knowledge-based and creative companies will be formed in these fields. It is possible to present films, pictures and books of historical and contemporary figures and various aspects of the lives of cultural and historical figures with special effects and using modern technologies. It is also possible to introduce real heroes and legends to young people.

Using this method, it is more effective in accepting, identifying and introducing cultural heritage and personality, and it is also possible to create knowledge-based and creative companies that work creatively in the production of works of art and in the field of producing products and providing cultural and artistic services. Also, today's technology is used and jobs, added value and wealth are created. In my opinion, it is right here that one should not use one's own cultural heritage in a raw and crude way.

* What role do you think modern technologies can play in introducing and presenting Iran's cultural characteristics and values to the world?

In my opinion, if the rich and powerful culture of Islamic Iran is to be introduced to the world community, this should happen in the best way, with the best packaging and using modern technologies such as artificial intelligence, Internet of Things, IT and ICT.

* In recent years, some western countries have been promoting the issue by presenting media advertisements that they are leaders in the field of protecting animal rights and have a high historical record in this field. Referring to Iran's history shows signs that Iran has a longer lead in the field of animal rights protection, but no work has been done on this field. Explain a little about this issue and how to highlight this cultural indicator of Iranians.

Today, in many advanced societies, especially in European and American countries, it is an issue that they are animal lovers, while Islam and Iran were animal lovers when they hunted and ate animals for fun.

Allow me to share a memory and experience that I once held responsibility for in the Ministry of Guidance. At that time, I came across a letter of endowment that existed in Isfahan province, and based on the endowment, the endowment had offered two large pieces of land to plant millet and barley seeds. Millet and barley were cultivated in these farmlands and their products were spread in the deserts so that the animals that did not have access to seeds in the winter could feed on these seeds and survive.

This dedication letter was created 400 years ago, and it continues, and it has been dated according to paleontology. Therefore, this example can be easily introduced to the world community, and at that time it will be clear that the fake slogans about some countries being leaders in the field of animal protection are wrong.

If these facts are stated correctly and simply and their validation is presented, they will be effective in introducing Iran to the world community, and besides attracting and attracting tourists, it will be effective in introducing Iran's rich Islamic culture and intangible culture in active defense of Iran. As a result, by collecting documents and presenting them properly, it is possible to represent a part of Iran's powerful, rich and deep-rooted culture.

* What measures does the Vice Presidency of Science and Technology plan to prevent the raw selling of culture and literature?

One of the measures taken by the Vice Presidency of Science and Technology, especially this year, is the establishment of creative and innovation houses in 20 fields of creative and cultural industries. These creative and cultural houses will be created, and of course, the work of these will be done by the private sector, but the necessary facilities and support will be provided by the scientific vice-chancellor.

* In which fields will the creative and innovation houses operate and what branches will they introduce and promote?

An applicant with an idea can enters this creative and innovative house and be placed in an acceleration course. Mentors and trainers help this person with an idea to turn his idea into a product or service. Market development, product development, financial facilities, legal facilities, technical consultations and finally marketing and entering ideas into global markets take place in the heart of creative and innovation houses.

Communication and Information Center in Vice Presidency of Science and Technology 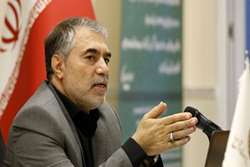 Parviz Karami: New Year's naming is a surprise for the technology and innovation ecosystem

Spokesman for the Vice President of Science and Technology described the 1401 title as a feast and a surprise by the Supreme Leader to tech-savvy activists, as national attention and the country's attention to what they have done successfully over the past decade.

Parviz Karami in an Interview with Hamshahri Newspaper:

Startup Iran; the Silicon Valley of the Middle East

In an interview with Hamshahri Newspaper with Parviz Karami, the secretary of the knowledge-based economy and culture-building technologies development headquarter, he talked about the startup ecosystem of the country.

Interview of Iran Newspaper with the Vice President for Science and Technology Affairs;

Startups have changes the taste of the society

After five years, we head to Sheikh Bahaei Boulevard again. My last interview with Sorena Sattari, the vice president for science and technology affairs, was five years ago and in the middle of his two important trips from New York to Tokyo. He talked about scientific diplomacy,