Dehghani in a meeting with the ambassador and head of the Academy of Sciences in Tajikistan:

Vice President of Science, Technology and Knowledge-Based Economy and the President of the Academy of Sciences in Tajikistan met and discussed the development of scientific, technological and market-oriented cooperation between the two countries. 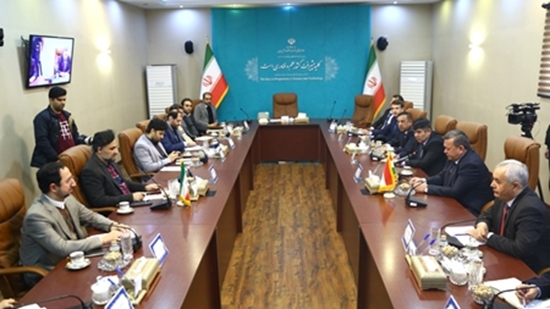 Ruhollah Dehghani, in a meeting with the ambassador and head of the Academy of Sciences in Tajikistan today, expressed his satisfaction that we are serving this delegation from Tajikistan in the year of production, knowledge-based and employment creation, and added: We have a lot in common with Tajikistan, the most important of which is language. Persian language is a special capacity that makes many communication more prosperous and less laborious.

The vice president of science, technology and knowledge-based economy, referring to the programs in the vice presidency of science in the field of supporting basic science researchers, added: to strengthen this department, we need 100 outstanding scientists in the field of basic science, so that we can allocate funds in this regard in the coming years, and Let us support them. This can be a joint program with the country of Tajikistan.

Pointing out that we have common economic and social issues with Tajikistan, Dehghani said: joint cooperation between Iran and Tajikistan can be developed in various fields including health, digital economy, artificial intelligence and other areas, and we welcome the proposals from the Tajik side. we do

Stating that Iran and Tajikistan are neighbors and this issue can create a good opportunity for cooperation between the two countries, he said: South Khorasan, North Khorasan and Razavi provinces have the closest border between Iran and Tajikistan and have strong centers in the fields of industry, medicine and science. There are people in these three Iranian provinces, and we can have wide connections with Tajikistan through these provinces and benefit from these capacities.

Joint cooperation with Tajikistan in the field of culture and literature was one of the other areas that Dehghani mentioned.

The head of National Elites Foundation emphasized that Iran cooperates and operates with Russia and China in the form of a club, and said: Considering these cooperations, it is possible to have cooperation in the form of science and technology commissions in a quadripartite manner with the presence of Tajikistan, and from this It created the possibility of further development and synergy with the country of Tajikistan.

Dehghani added: the joint cooperation of Iran and Tajikistan in scientific fields can be expanded, in recent years, the Islamic Republic of Iran has decided to produce and strengthen science and influence in some scientific fields, one of which is basic sciences (physics, chemistry, mathematics and ...).

Referring to the fact that we have a plan to strengthen basic sciences, we will support 100 prominent scientists in the coming years and allocate funds to them, he noted: This program can be with the cooperation of Tajikistan, in this regard, we can support scientists in the field of basic sciences. implement it jointly, so that the costs are shared and the scientific projects are carried out jointly.

In the end, he noted: We will use this opportunity and we believe that we can cooperate with Tajikistan in strategic fields to introduce joint products with Iranian and Tajik products to the international arena.

The Scientific Cooperation between Iran and Brazil Is Expanded

By Signing an Agreement;

Scientific and technological cooperation of Iran and Venezuela will be developed

Sorena Sattari on the 70th Anniversary of Establishment of the People's Republic of China:

The vice president for science and technology affairs announced the development of a 25-year joint cooperation document between Iran and China, stating: this comprehensive plan is designed and will be soon finalized. The document will help expand comprehensive cooperation in different areas.